Tried this recipe? Please leave a star ⭐️⭐️⭐️⭐️⭐️ rating below and/or a review in the comments section down the page. You can also stay in touch with me through social media by following me on Instagram, Pinterest, and TikTok or by subscribing to my newsletter.

Made with a combination of vegan butter, light brown sugar, and flax eggs, these blondies are moist and flavorful. Some people even call them blonde brownies! The addition of gluten-free flour, baking powder, and salt gives them a soft and chewy texture that's hard to resist. And, of course, no blondie is complete without a generous helping of chocolate chips and vegan chocolate spread, which add an extra layer of richness and indulgence to every bite.

They're the perfect sweet treat for anyone following a vegan or gluten-free diet, and they're sure to satisfy your cravings for something sweet and indulgent. Whether you enjoy them as an after-dinner dessert or as a midday snack, these blondies are sure to hit the spot. Happy baking!

Brownies and blondies are both types of baked desserts that are made with a mixture of flour, sugar, and butter. However, there are a few key differences between the two:

Texture: Brownies are typically denser and fudgier than blondies, which tend to be softer and chewier. Blondies are made with a higher ratio of butter to flour, which results in a softer, more cake-like texture.

Despite these differences, both brownies and blondies are delicious treats that are perfect for satisfying your sweet tooth. Whether you prefer the rich, fudgy flavor of brownies or the softer blondies, there's a dessert for everyone!

How do blondies made from scratch taste?

Blondies made from scratch tend to have a rich, buttery flavor and a soft, chewy texture. They are similar to brownies, but have a lighter, sweeter flavor because of the brown sugar. The texture of blondies can vary depending on the ratio of butter to flour used in the recipe. Some blondies may have a softer, more cake-like texture, while others may be slightly denser and chewier. Blondies made from scratch are a delicious and satisfying treat perfect for satisfying your sweet tooth.

Here are the key ingredients in the recipe for gluten free vegan blondies:

In a large mixing bowl, whisk together the melted vegan butter, light brown sugar, and sugar until well combined.

In a separate small bowl, whisk together the flax eggs and vanilla extract. Add the flax egg mixture to the butter and sugar mixture, and whisk until smooth.

In another small bowl, whisk together the gluten-free flour, baking powder, and salt. Gradually add the dry ingredients to the wet ingredients, stirring until just combined.

Stir in the chocolate chips until evenly distributed.

Add dollops of the vegan chocolate spread on top and use a knife to swirl the two mixtures together. Top with more chocolate chips.

Pour the blondie mixture into a greased 9x9-inch baking pan. Smooth the top with a spatula.

Bake the blondies for 25-30 minutes, or until the edges are lightly golden and a toothpick inserted into the center comes out clean.

Allow the blondies to cool in the pan for a few minutes before slicing and serving. Enjoy!

Tips for Making the Best Blondies

Here are a few ideas for add-ins you can try in this recipe for gluten free vegan blondies:

How to make a flax egg

To make one flax egg, you will need:

Flax eggs are a great vegan egg substitute and can be used in many different types of baked goods. They help to bind the ingredients together and give structure to the finished product. Keep in mind that flax eggs may result in a slightly different texture and flavor than regular eggs, depending on the recipe.

Although there are many gluten-free flours, not all act the same in recipes. One of the best gluten-free flour brands for blondies is King Arthur Measure-for-Measure Gluten-Free Flour. It acts the same as regular all purpose flour. The blend already contains xanthan gum, too. This flour is made from a blend of gluten-free grains and is specially formulated to be a cup-for-cup replacement for all-purpose wheat flour in most recipes. This makes it easy to use in a wide range of baked goods, including blondies.

How to Line a Brownie Pan with Parchment Paper

Here is a list of equipment you will need to make this recipe for gluten free vegan blondies, along with an explanation for why each item is necessary:

Many people consider Miyoko's Creamery to be the best vegan butter brand on the market. This brand is known for its high-quality, plant-based butter alternatives that are made from a blend of coconut oil and other natural ingredients. This is the brand I use in these gluten-free vegan blondies.

One of the things that sets Miyoko's Creamery vegan butter apart from other brands is its flavor and texture. It has a creamy, rich flavor that is similar to traditional butter, and it has a smooth, spreadable consistency that makes it easy to use in a wide range of recipes. It is also free from dairy, soy, and other common allergens, making it a great choice for those with dietary restrictions.

Check out my vegan s'mores cookies on my blog!

How to Cut Blondies Perfectly

By following these tips, you should be able to cut perfect, even slices of blondies every time!

To store these gluten-free vegan blondies, follow these steps:

Can you freeze blondies?

You can freeze blondies for up to a month. Just be sure to wrap them well to prevent them from drying out and to keep them fresh.

What is the texture of blondies?

They are typically moist, chewy, and dense, with a soft, fudgy texture. The outside edges of blondies are often slightly crispy and caramelized, while the center is soft and gooey.

Can I use a different type of sugar in this recipe?

Light brown sugar is used in the recipe because it adds a rich, caramel-like flavor to the blondies, but you can use dark brown sugar or white sugar instead if you prefer.

Can I use a different type of gluten-free flour in this recipe?

Can I use a different type of egg replacer in this recipe?

The recipe calls for flax eggs, which are made from ground flaxseeds mixed with water. If you don't have flax seeds, you can use another type of egg replacer such as chia eggs or a store-bought egg replacer.

Can I use a different type of chocolate in this recipe? 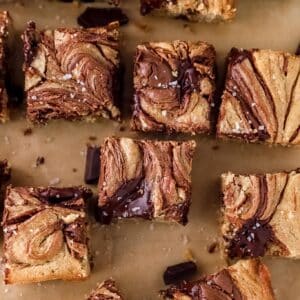 Are you looking for the perfect gluten-free vegan blondies recipe? Look no further! In this post, I'll show you how to make delicious and fudgy gluten-free vegan blondie recipe that everyone will love. Plus, I'll give you some tips on how to make them even more amazing and share some variations you can try.
5 from 2 votes
Print Recipe Pin Recipe
Prep Time 15 mins
Cook Time 25 mins
Total Time 40 mins
Course Dessert
Cuisine American
Servings 12 pieces
Calories 137 kcal

***Mix 3 tablespoons of ground flaxseed with 9 tablespoons of water to make 3 flax eggs. Substitute with 3 eggs if you're not making this recipe vegan.

You can usually find me in the kitchen whipping up new recipes. They’re always gluten free, and I’m always making a mess of my kitchen. I’m so delighted I get a chance to share my recipes with you and hope you’ll follow along with me.

I love hearing your feedback so please don't hesitate to reach out if you have any questions, requests, or feedback. Cheers!